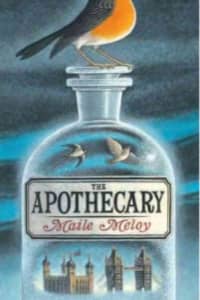 This story is about a fourteen year old girl named Jane (Janie) Scott who suddenly moves to London from Los Angeles because of her parents believing in the First Amendment. In London, 1952, she meets this different, curious boy named Benjamin who wants to be a spy for the British Intelligence. When Benjamin’s dad, the Apothecary, gets captured, Janie and Benjamin team up to rescue him and unravel the secrets from a valuable book called The Pharmacopoeia. Throughout the  dangerous journey, Soviet spies are trying to gain hold of nuclear ammunition, not-so-friendly cops try to make arrests, and new friends come along to help. Will Janie and Benjamin rescue the apothecary and reach home safe-and-sound? Or will their enemies defeat them before the journey even started?

The Apothecary is quite a relatable story line as even now these secret organizations/spies (ex. British Intelligence, Russian/Soviet spies) and World War ll exist in recent history. I would without a doubt recomend this book to all who love fiction, history, friendship, and adventures. I would rate this book a 5/5 stars because from the moment that Janie and Benjamin met, I got drawn into this remarkable book.