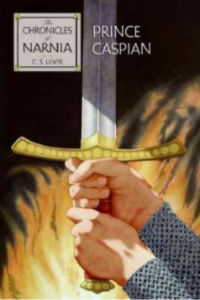 After a treasured quest, once again, four Pevensie children travel from boarding school to the magical world called Narnia after realizing that a long 1300 years have slipped away. When Peter hears that another war has been set in Narnia, Peter challenges King Miraz to a duel. The children unite with Prince Caspian to dethrone the wicked King Miraz to reinforce peace in Narnia. Will Lucy, Edmund, Susan, and Peter help create peace in Narnia and win the duel with King Miraz? Or will King Miraz continue to rule Narnia with his wicked schemes?

Prince Caspian is the follow up to The Lion, the Witch, and the Wardrobe which was really connected together by uniting the four children with an ally to stop evil.  I really liked this book and read it several times. It was thrilling, adventurous, and kept me hooked until the last page. This book definitely deserves a rating of 5/5 stars. I really liked all the new characters introduced in this book like Prince Caspian and King Miraz.

Place a hold in our WCCLS catalog.