The Winners have been Announced!

The 2021 winners for the Youth Media Awards, presented by the American Library Association, were announced on January 21. These awards recognize authors and illustrators in a variety of categories for children and young adults. Perhaps your favorite book won a prize, or maybe you’ll find something new to read!?  Find a full list of awards at ALA’s website and request titles from our 2021 Youth Media Award Winner booklist. 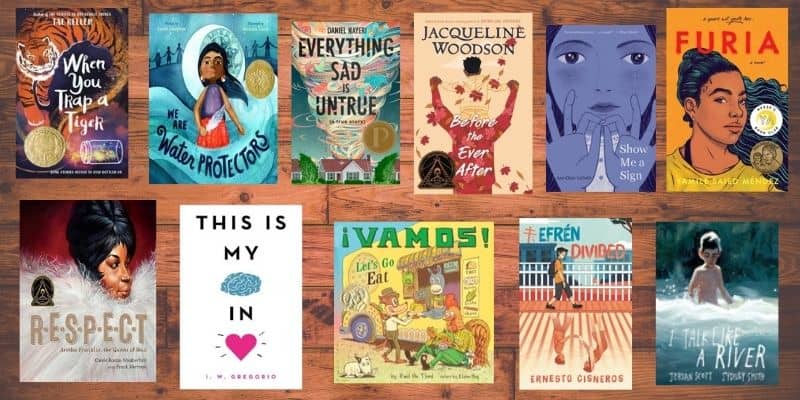 The John Newbery Medal for the most outstanding contribution to children’s literature: When You Trap a Tiger by Tae Keller.

Would you make a deal with a magical tiger? This uplifting story brings Korean folklore to life as a girl goes on a quest to unlock the power of stories and save her grandmother.

The Randolph Caldecott Medal for the most distinguished American picture book for children: We Are Water Protectors, illustrated by Michaela Goade and written by Carole Lindstrom.

Inspired by the many Indigenous-led movements across North America, We Are Water Protectors issues an urgent rallying cry to safeguard the Earth’s water from harm and corruption―a bold and lyrical picture book written by Carole Lindstrom and vibrantly illustrated by Michaela Goade.

The Michael L. Printz Award for excellence in literature written for young adults: Everything Sad is Untrue (a true story) by Daniel Nayeri.

After fleeing Iran, teenager Khosrou  and his family find themselves in Oklahoma, where he changes his name to Daniel and struggles to find acceptance from classmates who see him only as a poor refugee who often smells of pickles and garlic.

The 2021 Coretta Scott King Book Award recognizing an African-American author of outstanding books for children and young adults: Before the Ever After by Jacqueline Woodson.

The son of an idolized pro-football star begins noticing the contrast between his father’s angry, forgetful behavior and his superhero reputation before adjusting to a new reality involving difficult symptoms stemming from his father’s numerous head injuries.

Little Lobo, a Mexican American, and Bernabé, his dog, gather tacos, frutas picadas, cuernos, and more and deliver them to los luchadores preparing for Lucha Libre 5000.

The 2021 winner of the Pura Belpré Children’s Author Award is Efrén Divided, written by Ernesto Cisneros.

While his father works two jobs, seventh-grader Efrén Nava must take care of his twin siblings, kindergartners Max and Mia, after their mother is deported to Mexico

Seventeen-year-old Camila Hassan, a rising soccer star in Rosario, Argentina, dreams of playing professionally, in defiance of her fathers’ wishes and at the risk of her budding romance with Diego.

The Schneider Family Book Awards are awarded to books that embody an artistic expression of the disability experience. The 2021 Award Winner for Young Children (ages 0 to 10) is I Talk Like a River, written by Jordan Scott and illustrated by Sydney Smith.

When a child has a “bad speech day” at school, his father gives him a new perspective on his stuttering.

About the Author: Teresa

Teresa has been a children’s librarian for almost 20 years and she considers herself very lucky to be doing what she loves the most; reading books to children. Teresa is knowledgeable about all things toddler, thanks to her experience with Twos Together storytime. She and Buzzy Bee can be found together almost every Tuesday and Wednesday.