The Marvels: Another Selznick masterpiece 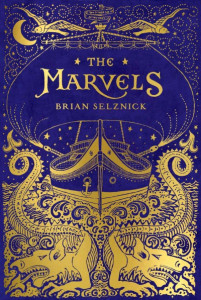 Brian Selznick has created another masterpiece with his latest book, The Marvels. The story starts in 1766 on the ship Kraken where two brothers perform a play called: “Angel and the Dragon”. Suddenly a big storm arrives… and also a big fire… and the only survivors: younger brother, Billy Marvel, and his dog, Tar, who land in a London theatre.

Billy is followed by generations of famous actors until the in-famous Leontes Marvel who is banished from the theatre by his own father in 1900. While running away, Leontes finds his grandfather, Alexander, hiding under the stage. And then there is another fire…Ninety years later, Joseph runs away from school trying to find his uncle in London. Joseph longs for family since his traveling parents are not exactly warm and loving.  Will he find his uncle? What will he learn about his family and especially about his gay uncle?

Brian Selznick tells the story mainly through amazing black and white pictures. He has a special talent not only to mix illustrations with text, but also to find a true story and present it as an enchanting masterpiece. More about The Marvels (including a cool book trailer made by the author), can be found here. Try other books by Brian Selznick: The Invention of Hugo Cabret and Wonderstruck

Recommended for ages 10 and up

About the Author: Marta

Marta grew up in Poland where she worked with high school students as a librarian. Since she moved to the U.S., she enjoys working with babies and preschoolers even more. Marta takes care of the library fish and loves seeing young kids “reading” to them! She orders chapter books, graphic novels and games for the young readers in our community. Marta’s favorite place in Oregon: Crater Lake! Her secret wish: time travel!