September 13 is the birthday of Roald Dahl, author of James and the Giant Peach, Charlie and the Chocolate Factory, Matilda, The BFG and more.

Over his career, Dahl produced well over a dozen children’s books, but The BFG,  starring a girl named Sophie (named after Dahl’s first grandchild) may be his favorite. Sophie forms a strong friendship with a big friendly giant (BFG) who refuses to eat children, unlike the other giants. They team up together on a plan to get rid of the bad giants. The fabricated language (known as “Gobblefunk”) and irreverent humor in the BFG appeal to child-like, active imaginations. Another favorite is Matilda, an exaggerated tale about an intelligent girl dealing with life amid unintelligent, greedy adults. 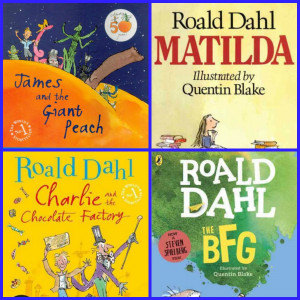 Stop by the kids area at Cedar Mill Libraries anytime on September 13 to play a finding game or explore other activities. Want  more ideas for Roald Dahl Day? Try these ideas. Or check out Roald Dahl’s Revolting Recipes cookbook and make a batch of “Wormy Spaghetti” from The Twits, or “Snozzcumbers” from The BFG.

About the Author: Rebecca

Rebecca grew up in a small Midwestern town where she was a band geek and avid reader. She's lived in Oregon since 2002. Besides reading, she enjoys playing with her kids, traveling, yoga, and visiting the beach. She loves working with kids and families!