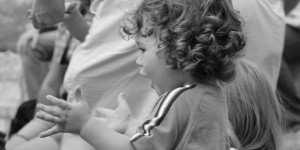 If you think of kid’s music as synthesizer-based fluff or nursery rhymes sung by an off-key children’s chorus, think again. Today’s independent kid’s artists (aka “kindie” musicians) make rock and folk music highly enjoyable for kids as well as their parents. As Warren Truitt observes in “Indie Music for Kids: An Essential Playlist“, kindie music has “experienced unprecedented growth in critical recognition, as evidenced by several Grammy awards and nominations over the last few years” Artists such as Recess Monkey, Frances England, Justin Roberts, Lunch Money, Caspar Babypants, and Elizabeth Mitchell have all become positive examples of this trend.

Listening to music and sharing a love of songs is one of the best ways to bond with my young boys and create quality family time. We’re fortunate here in the Pacific Northwest- especially in Portland, Oregon- that the Portland Kindie music scene is rich with talented and fun performers for young kids and families.  Last year, we caught Red Yarn’s ‘Deep Woods Revival’ record release show. Packed with grown-ups and kids of all ages, it was an engaging and joyful performance. His new album, released in April 2016, is Wake Up and Sing! Check out his free performance for Cedar Mill Library on July 20 at 10:00 am, at the St. Pius X Catholic Church Community Center, 1280 NW Saltzman Road.

Next time you’re at the library, browse our music collection to discover new (or old) favorites. Check out more local performers websites below.  -Rebecca

About the Author: Rebecca

Rebecca grew up in a small Midwestern town where she was a band geek and avid reader. She's lived in Oregon since 2002. Besides reading, she enjoys playing with her kids, traveling, yoga, and visiting the beach. She loves working with kids and families!