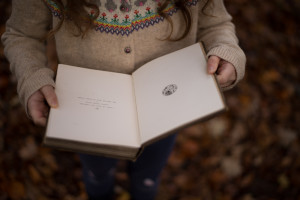 As a youth librarian and a parent of a boy and a girl, I observed the books that my own children have enjoyed as they were growing up and want to share them with you.  I hope your precious ones will enjoy these as well! -Laveda

Hint: if you notice your child enjoying a certain book  especially,  go ahead and set it aside in a treasure box for them to read again when they are older or even grown! They will be so glad that you saved their favorite stories!

The Forests of Silence: Deltora Quest, Book 1 by Emily Rodda is the start of a thrilling series about the evil Shadow Lord who is planning to take over the land of Deltora and enslave all its people. In order to stop him 16-year old Lief and former palace guard Barda must find all seven stones from the magic belt of Deltora.

Into the Wild: Warriors, Book 1 by Erin Hunter is the start of a popular series. For generations, four clans of wild cats have shared the forest. When their warrior code is threatened by mysterious deaths, a house cat named Rusty may turn out to be the bravest warrior of all.

Ivy + Bean by Annie Barrows is the start of an adorable series for girls. When seven-year-old Bean plays a mean trick on her sister, she finds unexpected support for her antics from Ivy, the new neighbor, who is less boring than Bean first suspected.

Dork Diaries: Tales From A Not-So-Fabulous Life by Rachel Russell. Fourteen-year-old Nikki Maxwell writes in her diary of her struggle to be popular at her exclusive new private school, then of finding her place after she gives up on being part of the elite group.

About the Author: Youth Services