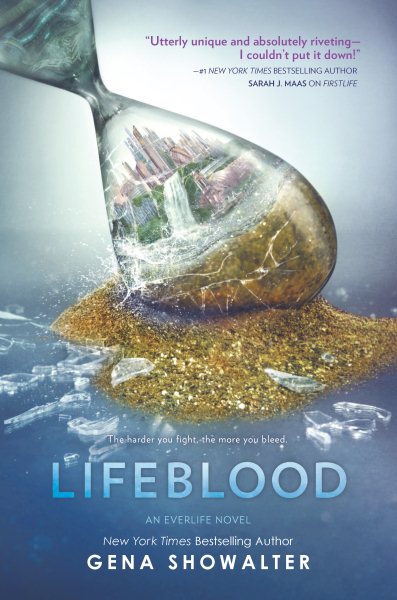 Spoilers for Firstlife (first book in the Everlife series)

Now that Tenly “Ten” Lockwood has chosen her realm and settled in, Myriad is still trying to recruit her to be a general for their realm. Ten’s conduit powers have caught the eyes of everyone, making her a very popular person in the realm of Troika. Lifeblood is about how Ten is settling in the realm of Troika, and how the war between the realms is getting worse and worse.

The writing is fantastic! The writing perfectly describes what the main character is feeling, and it’s like the reader is the protagonist. The writing is so unique and so genuinely raw that it is impossible to stop reading Gena Showalter’s books, Firstlife and Lifeblood. The author enables you to feel the emotions Ten feels, and more. At times, I was genuinely stressed, but when Ten sees the man she loves, my heart literally fluttered.

The romance was also great. I like how Ten stayed loyal to who she loved in Firstlife, Killian Flynn. But even more how the love between them was so natural, not forced at all, and how even though Killian and Ten are in different realms, they still unconditionally love each other. Both Ten and Killian love each other equally, and you can understand why they love each other. The romance and love is so authentic and real that readers will not be able to stop reading and screaming.

Lifeblood starts right after Firstlife ended, which is something very different. But this permits you to not be confused about what is going on, and you don’t have to be caught up. The character development is by far the best part of this book. You really see how Ten matures as a person, and how she grows into her role of a conduit, and how she changes. She learns how to make sacrifices, and she is really different compared to Ten in Firstlife. Ten becomes a more logical thinker, but doesn’t change completely. You also see some character development with Killian.  Gena Showalter also introduces new characters, and makes them all have a key role.

Lifeblood is a book which has absolutely no flaws in my mind. The writing, romance, details, character development and more makes this book a must read. I would rate this 5 out of 5 stars!

Check this book out at WCCLS