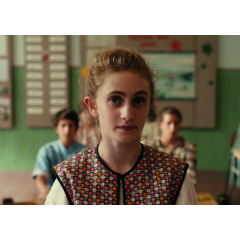 In a middle school classroom in Bratislava in 1983, a new teacher asks each student to stand up, introduce themselves and tell her what their parents do for a living. It soon becomes clear that the pupils’ grades are related to how willing their parents are to help the teacher with her errands, her housecleaning, and other random services. One student dares to call out the teacher and then feels so hopeless at the repercussions that she attempts suicide. The director of the school calls for an emergency parents’ meeting to remove the teacher; however, because Ms. Drazdechova is also a high-ranking official of the Communist Party, parents are hesitant to sign the petition. In a classroom behind the Iron Curtain, the futures of all the families are at stake, as the film examines how each family must wrestle with standing up for what they believe in or silently keeping the status quo.

The story depicted in The Teacher is based on similar events that took place in Czechoslovakia in the early 1980’s. Reflecting on the issues brought forth, film director Jan Hřebejk – who still remembers when the actual events occurred – commented that this story is not about a teacher bullying students nor are the circumstances just a feature of the Communist era. “Things were more dramatic back then [but] similar moral dilemmas, manipulations, and ambiguities are something we all face every day,” he says.

Rather, Hřebejk stresses, the main theme of the film is fear as a test of character and he challenges the viewer to reach for honest self- awareness. He reminds us that “Human nature doesn’t change; all adults and most children have experienced the feeling where something that might benefit you now might also be the wrong thing to do. Or the other way around: that following your conscience or moral code may be difficult or very disadvantageous. When I think of The Teacher, I see it as a carefully organized and engrossing analysis of how a society can slowly grow numb and browbeaten to the point of losing hope of effecting any change at all. It is a film about how collective lethargy can lead to tragedy. And a film about the hope contained in refusing to stand idly by, about overcoming one’s own fears. This is something that I find extraordinarily topical, and if it is well filmed, it always will be!”

Join us on Wednesday evening, May 30th, when the Film Club screens this compelling film from the Czech Republic. A bonus short film begins at 6:15 before we launch into the evening’s feature. Newcomers are welcome and all are invited to stay for an informal discussion after the film.