Film Club: The Story of the Weeping Camel (Mongolia)

The official March selection for CML Film Club was slated to be Second Coming, a film from the United Kingdom exploring a family’s response to an unexpected and inexplicable pregnancy. Unfortunately when I watched the film in order to write about it for you here, I discovered that our disc is defective. Perhaps the Film Club will come back to Second Coming in the future. We will certainly return the defective disc and add a new one to the collection. However, for this month we’ll pivot to The Story of the Weeping Camel, a magical film from Mongolia that combines fact and fiction in a quirky docudr 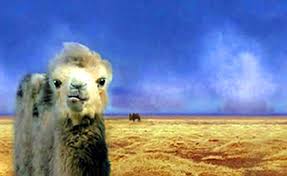 ama. Below is the film’s official description provided on the back of its case. In this time of division, displacement and heartache around the world, here is an opportunity to participate for a little while – if only as an observer – in a culture that is still able to honor its ancient traditions as it revels in family ties, the wisdom of community, and the thrill of being really good at what it does for a living. ~Lynne

Springtime in the Gobi Desert. A family of nomads assist in the births of its camel herd. They face a crisis when one white calf is rejected by its mother after a particularly difficult birth. When all hope seems lost, the family sends its two young boys on a journey to a far-off village to fetch a musician capable of performing a magical ceremony.

The Story of the Weeping Camel is a work that combines hard-hitting truth with uplifting drama. The film’s sweeping vistas and magical photography capture the very essence of this part of the world, while its emotionally charged story of separation and reconciliation reminds us that the heart, whether human or animal, knows no borders.

In a review written in 2004, film critic Roger Ebert had this to say about the film: “Legend has it that if a camel finally agrees to nurse her young, this will cause her to weep. There are also a few damp eyes among members of the family. All of this is told in a narrative that is not a cute true-life animal tale, but an observant and respectful record of the daily rhythms and patterns of these lives. We sense the dynamics among the generations, how age is valued and youth is cherished, how the lives of these people make sense to them in a way that ours never will, because they know why they do what they do, and what will come of it. The causes and effects of their survival are visible, and they are responsible.”