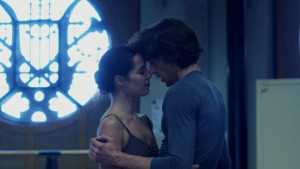 Sweeping in scope yet full of intimate moments, The Paris Opera opens in the autumn of 2015. Stéphane Lissner is putting the finishing touches to his first press conference as director while backstage, artists and crew prepare to raise the curtain on a new season with Schönberg’s Moses and Aaron. But the announcement of a strike and arrival of a bull in a supporting role complicate matters. At the same time, a promising young Russian singer begins at the Opera’s Academy. In the hallways of Opera Bastille, his destiny will cross paths with that of Bryn Terfel, one of the greatest voices of his time. As the season progresses, more and more characters appear, playing out the human comedy in the manner of a documentary Opera. But this comedy is set against a tragic backdrop when a series of terrorist attacks on the night of November 13th plunge Paris into mourning. Even though the show must go on at all costs, there is no end of trouble for the new director. Star choreographer Benjamin Millepied jumps ship soon after taking over as director of ballet at Palais Garnier. Preparations for Richard Wagner’s six-hour opera Die Meistersinger reunite the company.

In turn ironic, light-hearted and cruel, encompassing music and ballet, The Paris Opera turns the spotlight on great passions and tells the story of life behind the scenes of one of the most prestigious performing arts institutions in the world. Spanning the course of one tumultuous season, this film reveals the dedication of the talented personnel who bring breathtaking spectacles to the stage night after night.

Join the Film Club for a night at the opera on Wednesday, August 29. We’ll start with a bonus short film at 6:15 pm. Popcorn, tea and coffee are provided, and all are welcome to stay and chat about the film afterwards.