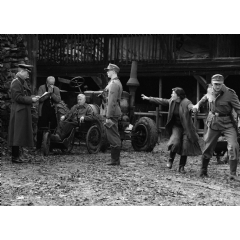 Olga, a beautiful Russian countess and member of the French Resistance during WWII. Along with Olga, we meet Helmut and Jules. Helmut is a handsome, high-ranking, yet naïve German SS officer who once fell madly in love with Olga and meets her again when she is shipped to a concentration camp.  Jules is a French-Nazi collaborator who is assigned to investigate Olga’s case. Victim, bystander, or monster – the film collapses these three identities, offering a new perspective on the Holocaust. Shot in stunning black and white, the film depicts the morally complex choices people make during the darkest of times.  Join Film Club (newcomers always welcome) on Wednesday evening, June 27th, at 6:15 pm.