Film Club: In Between (Israel) 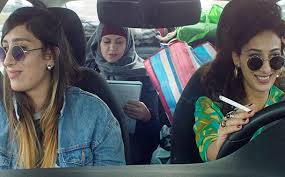 IN BETWEEN  is a remarkable debut film that follows three strong and independent-minded Palestinian women who share an apartment in Tel Aviv. Away from the constraints of their families and tradition, they find themselves “in between” the free and unfettered lives they are aspiring to lead and the restrictions still imposed on them by society. Laila, a successful lawyer, craves the love of a good man and thinks she’s found him in the apparently open-minded and handsome Ziad. Salma, while striving to fulfill her dream of becoming a DJ, falls for a beautiful doctor, but is forced to keep their love a secret from her family. Laila and Salma’s hard partying lifestyle initially comes as a shock to the more traditional and reserved Nour. She is engaged to marry a seemingly devout Muslim, who, behind closed doors, is not the man he appears to be. Eventually, a shocking series of events will push these brave women to the limits and change their lives forever, while also sealing their bond of friendship.

The director of this ground-breaking film is Palestinian writer Maysaloun Hamoud. Born in Budapest in 1982, Hamoud grew up in Dier Hanna, a village in northern Israel. After completing her B.A in Middle Eastern History at the Hebrew University and graduating with a master’s degree in history from the University of Jerusalem, she decided to study filmmaking at the Minshar School of Art in Tel Aviv, graduating with distinction. She has been living in Jaffa for the past 8 years. In an interview with i24News, Hamoud discusses how the film reflects on the Arab New Wave emerging among young people throughout  the Arab world. She says, “The youthful spirit of the Arab Spring did not pass over Palestine/Israel. We were all there with our souls. In one moment cries of “Kefaya” (Arabic for “Enough”) left the mouths of millions of young people who were tired of the old biases based on oppression, patriarchy, sexism, exclusion, repression of homosexuality and the perpetuation of traditional codes that were aimed at securing the existing order. The “Enough!” is an expression of a conscious change that is happening in the younger generation. This generation can no longer continue playing with codes that aren’t relevant anymore. We must put things on the table, as long as we continue to sweep the fears under the carpet, the carpet will rise and we will all stumble into the darkness that overshadows our freedom. If we don’t shake out the carpet and deal with things now it will be too late and degeneration will conquer.” Read the full interview here.