The Unintentional Adventures of the Bland Sisters 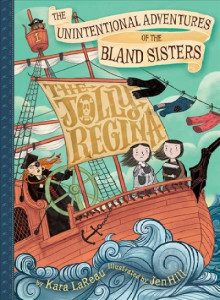 “Jaundice and Kale pride themselves on their exacting routine. After breakfast (plain oatmeal with skim milk, a cup of weak, tepid tea on the side) they tend to their business of darning other people’s socks, which takes the better part of the day. Each allows herself one ten-minute break, during which she eats a cheese sandwich on day-old bread and drinks a glass of flat soda while gazing out the window, watching the grass grow.” – The Bland Sisters’ normal routine, before piratey interruption

Meet the Bland Sisters Jaundice and Kale, reluctant protagonists of their first unintentional adventure The Jolly Regina by Kara LaReau and Jen Hill. Hilariously deadpan, the book invites comparison to Lemony Snicket’s similar tone. Crewed entirely by women and run by the dashing Captain Ann Tennille (yes, exactly), the Jolly Regina is the perfect place for the sisters Bland to be nonplussed and slightly put-upon.

What could follow up accidental swashbuckling on the high seas? Why, an Agatha Christie-esque whodunnit! Armed with general indifference and a copy of The Mystery of the Secret of the Clock Under the Stairs in the House on Cabin Island featuring the crimesolving Nubbins Twins, Jaundice and Kale hilariously stumble through the cabins of The Uncanny Express. Jen Hill’s illustrations perfectly complement the inadvertent thrills of both books.

Place a hold on either or both of them today!