The Spectacular Sisterhood of Superwomen 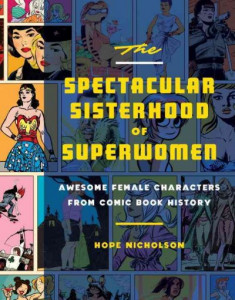 Hope Nicholson’s new book The Spectacular Sisterhood of Superwomen: Awesome Female Characters from Comic Book History, described by the author in her introduction as a guide to “the weirdest, coolest, most of-their-time female characters in comics – for better or for worse,” is exactly as advertised. Fully illustrated and divided by decade, The Spectactular Sisterhood of Superwomen tracks all kinds of representations from publishers large and small.

From the early days of Wonder Woman’s introduction from the pen of creator William Moulton Marston and the Hildy Johnson-esque Gail Porter: Girl Photographer, the book touches on well-known Silver Age superheroines (like Barbara Gordon as Batgirl) as well as virtually forgotten characters like ‘Scot from Gold Key Comics’ hepcat series The Modniks. Sue and Sally Smith, Flying Nurses rub shoulders with 1970’s Pauline Peril, an homage to the early 20th century damsel-in-distress serial The Perils of Pauline.

’80s punks Maggie Chascarrillo and Hopey Glass from Jaime Hernandez’s monumental work on Love and Rockets age in something approaching real time, changing and settling down in a genre where character stasis is the norm. Through the rest of the century and into the 21st as the comic medium became more fluid and malleable, the medium changed to include a wider variety of viewpoints and target audiences. Nowhere better is that seen than in Raina Telgemeier’s work, included here in the form of Drama’s character Callie. Relevant and resonant, Telgemeier’s work is essential reading.

Put a hold on The Spectacular Sisterhood of Superwomen today!