Inventing American Tradition: From the Mayflower to Cinco de Mayo 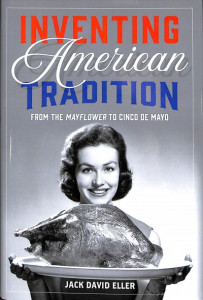 “Francis Scott Key never called his poem ‘The Star Spangled Banner’ – or anything else, for that matter, the title ‘Defence of Fort McHenry’ having been assigned by a newspaper editor – and Key did not write the melody in which it was to be sung. Indeed, ‘Anacreon in Heaven’ [the song whose tune Key’s poem had a note to be sung in] has a long, disputed and checkered story of its own.”

Blue jeans, Mickey Mouse, the Pledge of Allegiance, Paul Bunyan and McDonalds’ ubiquitous golden arches – staples of American pop culture and traditions all. To understand the country is to understand the development and trajectory of the treatment of the flag, holidays like Thanksgiving and Columbus Day, and quintessentially “American” fast food and heroes. Jack David Eller’s new book Inventing American Tradition: From The Mayflower to Cinco de Mayo studies all of these, noting how recent some of those really are (not least of which is the May 28, 1954 addition of “under God” to the Pledge, which itself had not been enshrined until the 1920s). Interrogating received notions about American history while showing how often these were reactions to questions about cultural identity and the place of a superpower in the world, the book points out that they are always changing.

“Verily, we love our traditions, whether they happened or not.”

Put a hold on it today!